With the 2018 Global Digital Yearbook We Are Social and Hootsuite deliver valuable information and insights on the internet usage, that I want to share with you:

Their extensive report reveals that there are now more than 4 billion people around the world using the internet; so well over half of the world’s population is now online. With the latest data showing that nearly a quarter of a billion new users came online for the first time in 2017.

Much of this year’s growth in internet users has been driven by more affordable smartphones and mobile data plans. More than 200 million people got their first mobile device in 2017, and two-thirds of the world’s 7.6 billion inhabitants now have a mobile phone. More than half of the handsets in use today are ‘smart’ devices too, so it’s increasingly easy for people to enjoy a rich internet experience wherever they are.

Social media use continues to grow rapidly too, and the number of people using the top platform in each country has increased by almost 1 million new users every day during the past 12 months. More than 3 billion people around the world now use social media each month, with 9 in 10 of those users accessing their chosen platforms via mobile devices.

The essential headlines for digital in 2018 are: 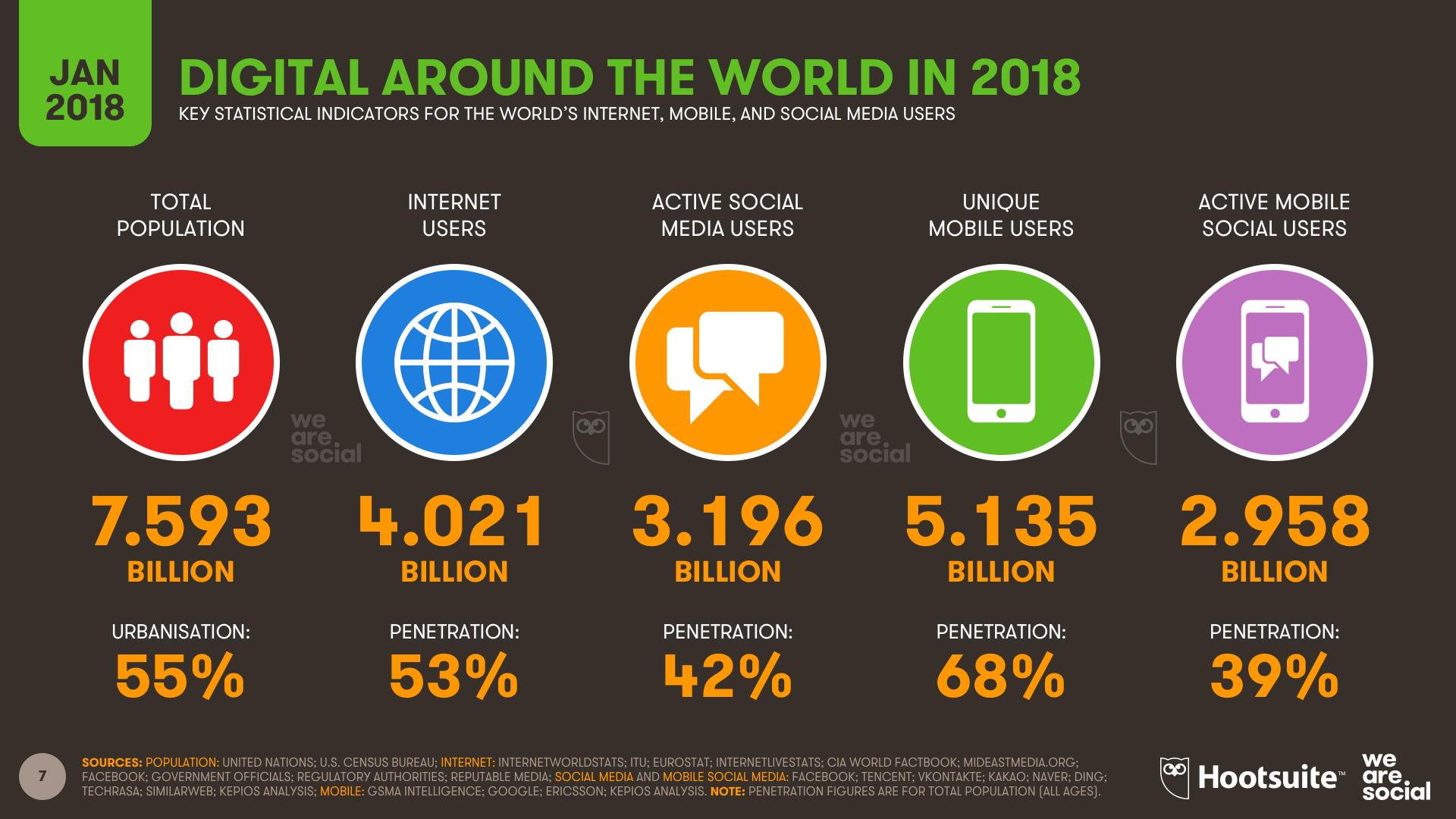 The key insights from this year’s reports shows:

It’s not just the number of people using the internet that has increased this year; the amount of time that people spend on the internet has also gone up over the past 12 months.

The latest data from GlobalWebIndex shows that the average internet user now spends around 6 hours each day using internet-powered devices and services – that’s roughly one-third of their waking lives. Added together for all 4 billion of the world’s internet users, people will spend 1 billion years online in 2018. 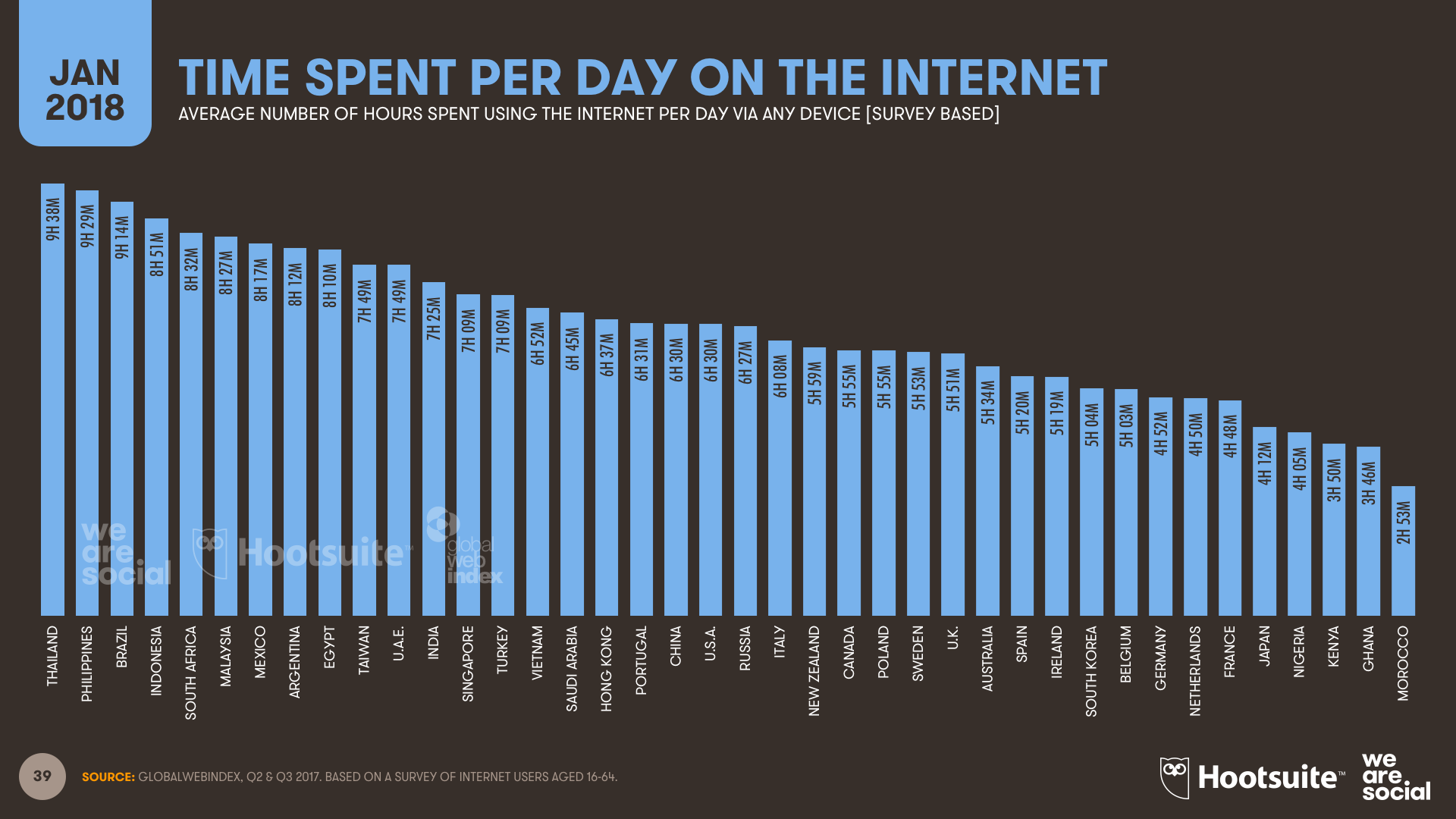 Internet access still isn’t evenly distributed around the world, but things are starting to change. 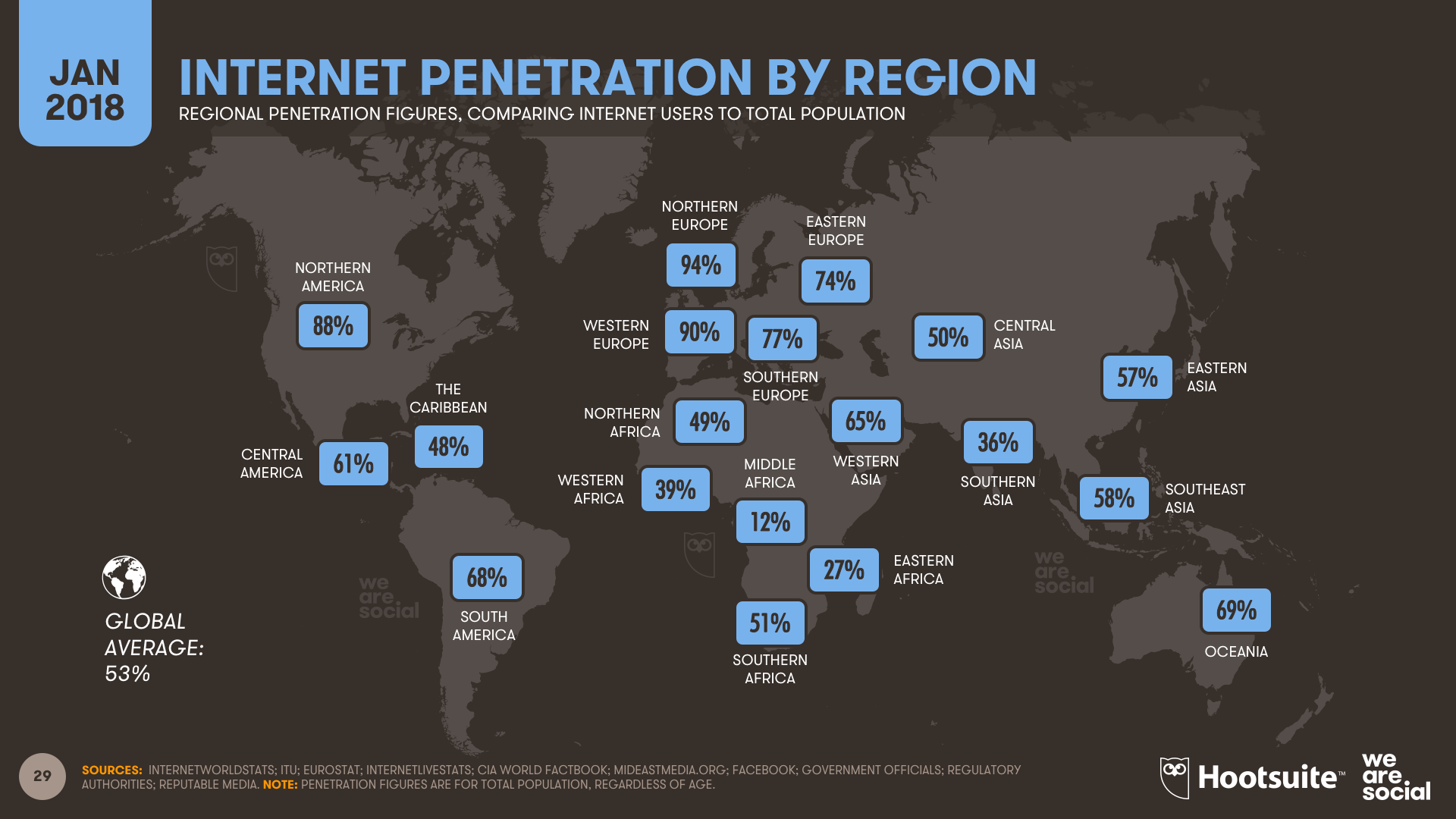 Internet penetration rates may still be low across much of Central Africa and Southern Asia, but these regions are also seeing the fastest growth in internet adoption. 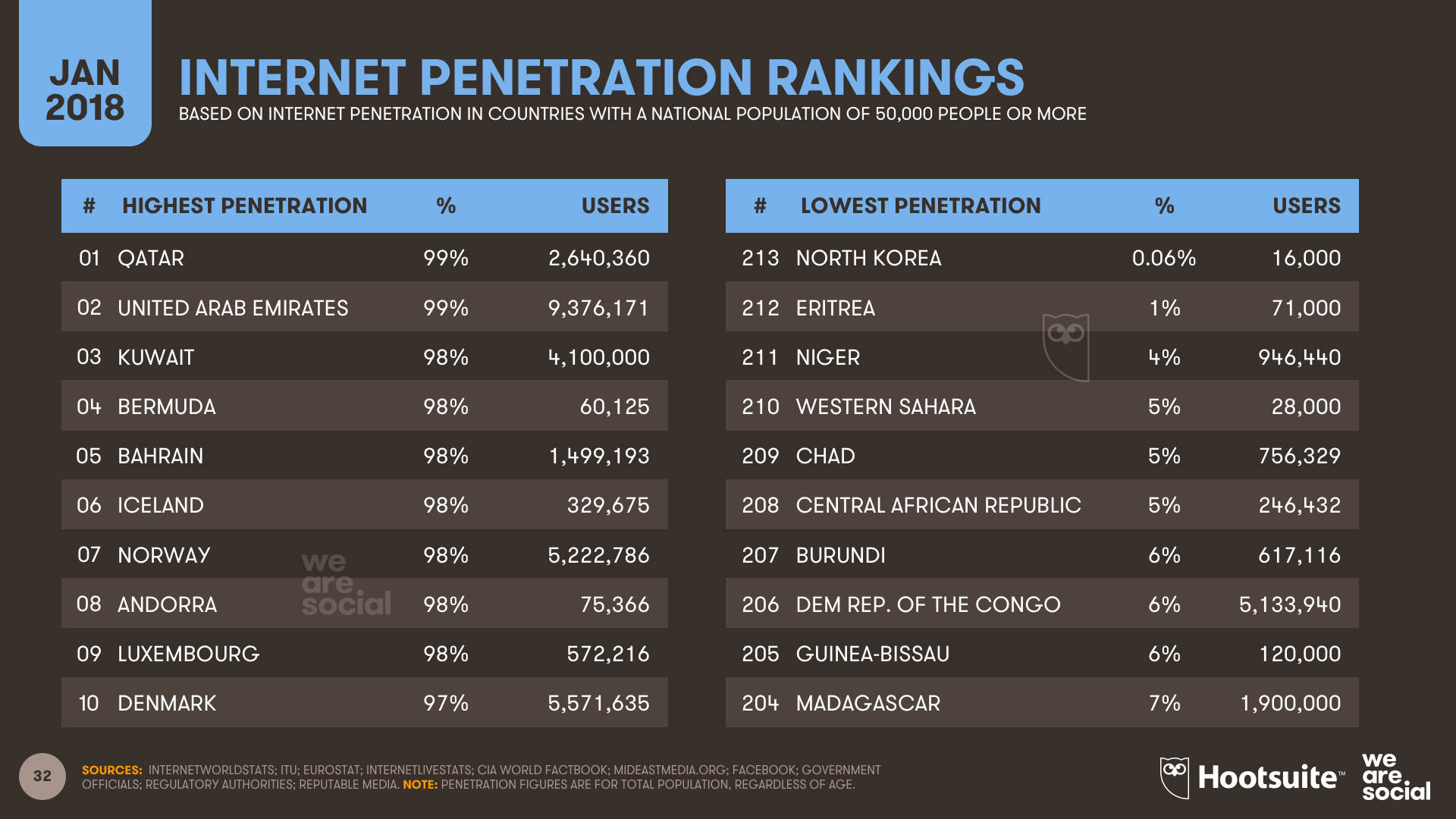 Accelerating access in developing economies will impact the internet experience for users everywhere, as companies like Google, Facebook, Alibaba, and Tencent strive to deliver scalable global products that address the needs and contexts of these new users.

These changes will have a profound influence on the future of the internet.

More than two-thirds of the world’s population now has a mobile phone, with most people now using a smartphone.

The number of unique mobile users around the world is up by more than 4 percent year-on-year, although penetration rates remain below 50 percent across much of Central Africa. 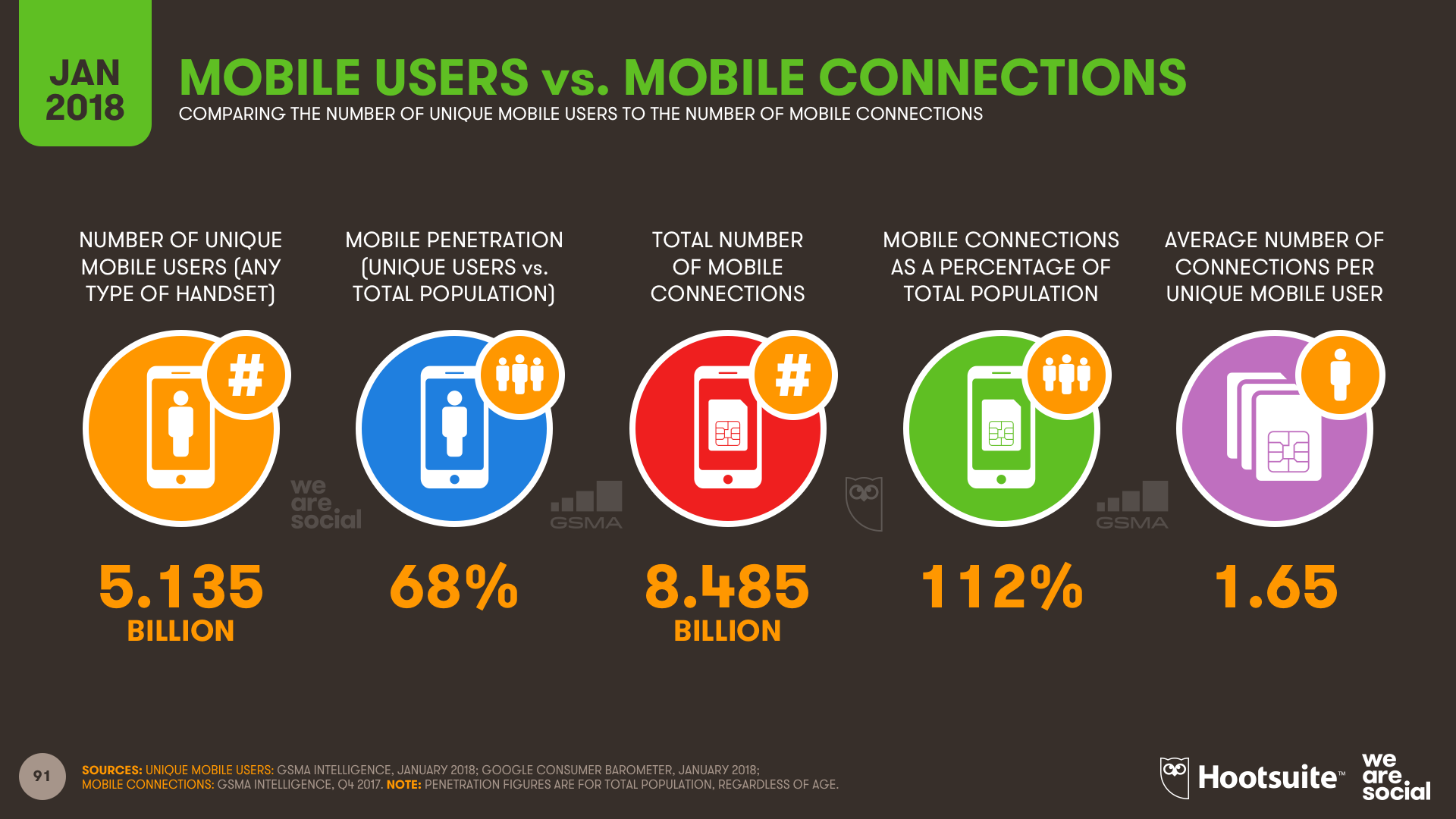 Smartphones are the world’s preferred choice for going online, accounting for a greater share of web traffic than all other devices combined. 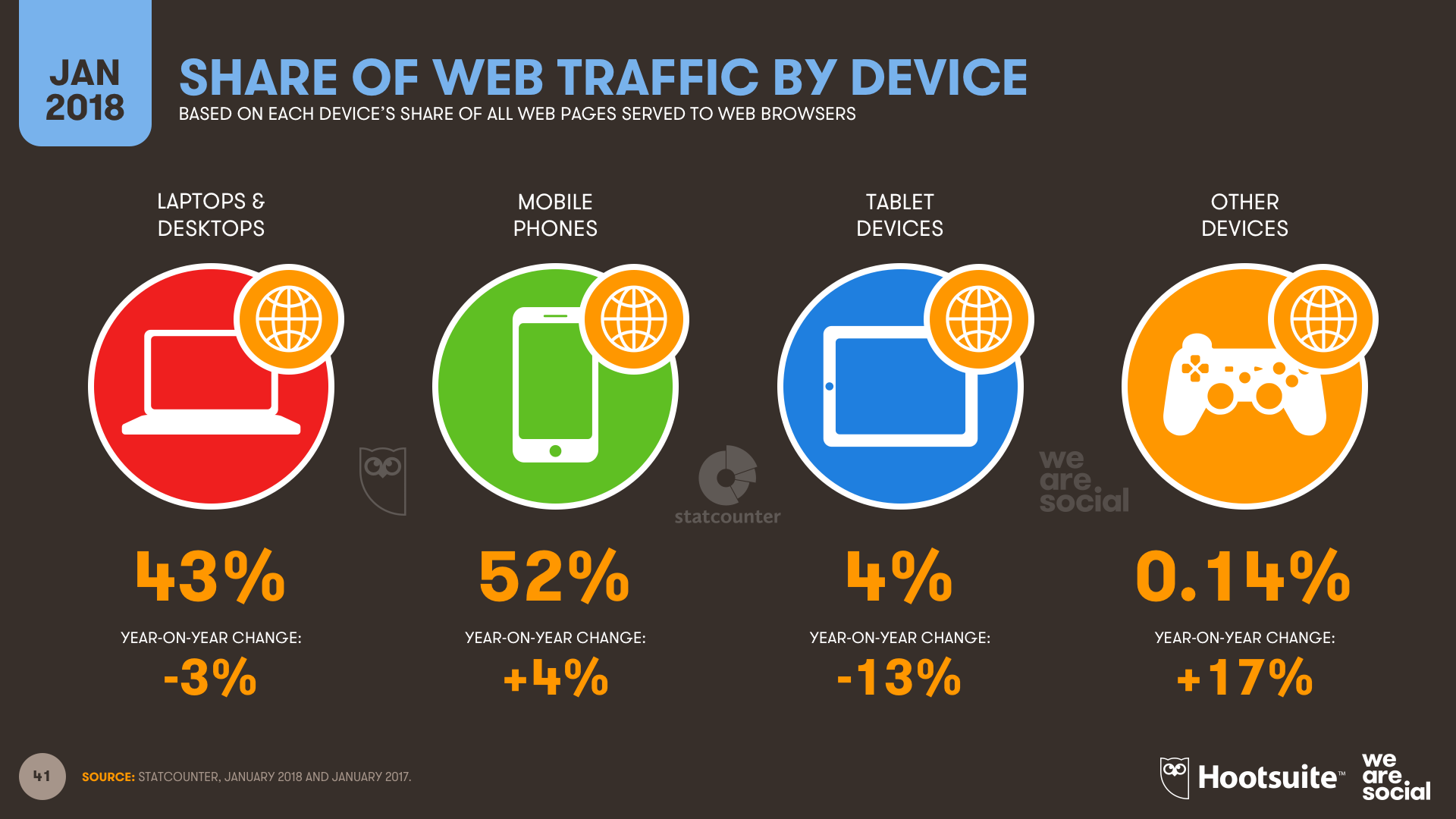 What’s more, this data is just for web use. The latest data from App Annie shows that people now spend 7 times longer using mobile apps compared to mobile web browsers, so mobile’s ‘share of internet’ is likely even higher than the figures above suggest.

The latest data from Facebook reinforces this finding, with just 5 percent of the platform’s global user base not accessing the platform via a mobile device. 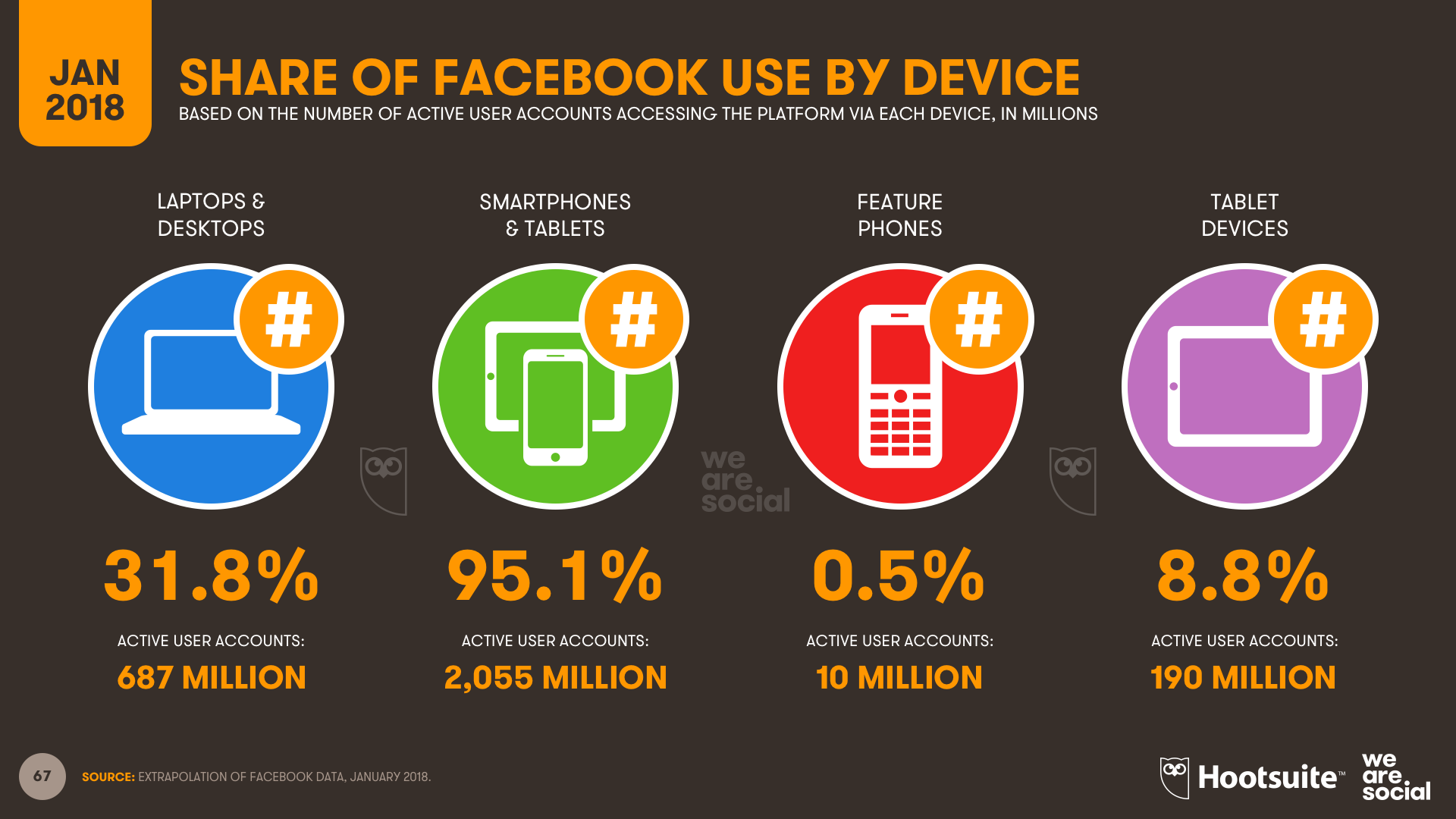 Almost 1 million people started using social media for the first time every day over the past year – that’s equivalent to more than 11 new users every second.

The global number of people using social media has grown by 13 percent in the past 12 months, with Central and Southern Asia recording the fastest gains (up 90 and 33 percent respectively).

Saudi Arabia has posted the fastest individual country growth rate across our 40 focus economies at 32 percent, but India is only just behind, with 31 percent annual growth in social media users.

As part of this growth, we’re seeing larger numbers of older users joining social media too.

Facebook’s core platform still dominates the global social landscape, with total users up 15 percent year-on-year to reach almost 2.17 billion at the start of 2018. 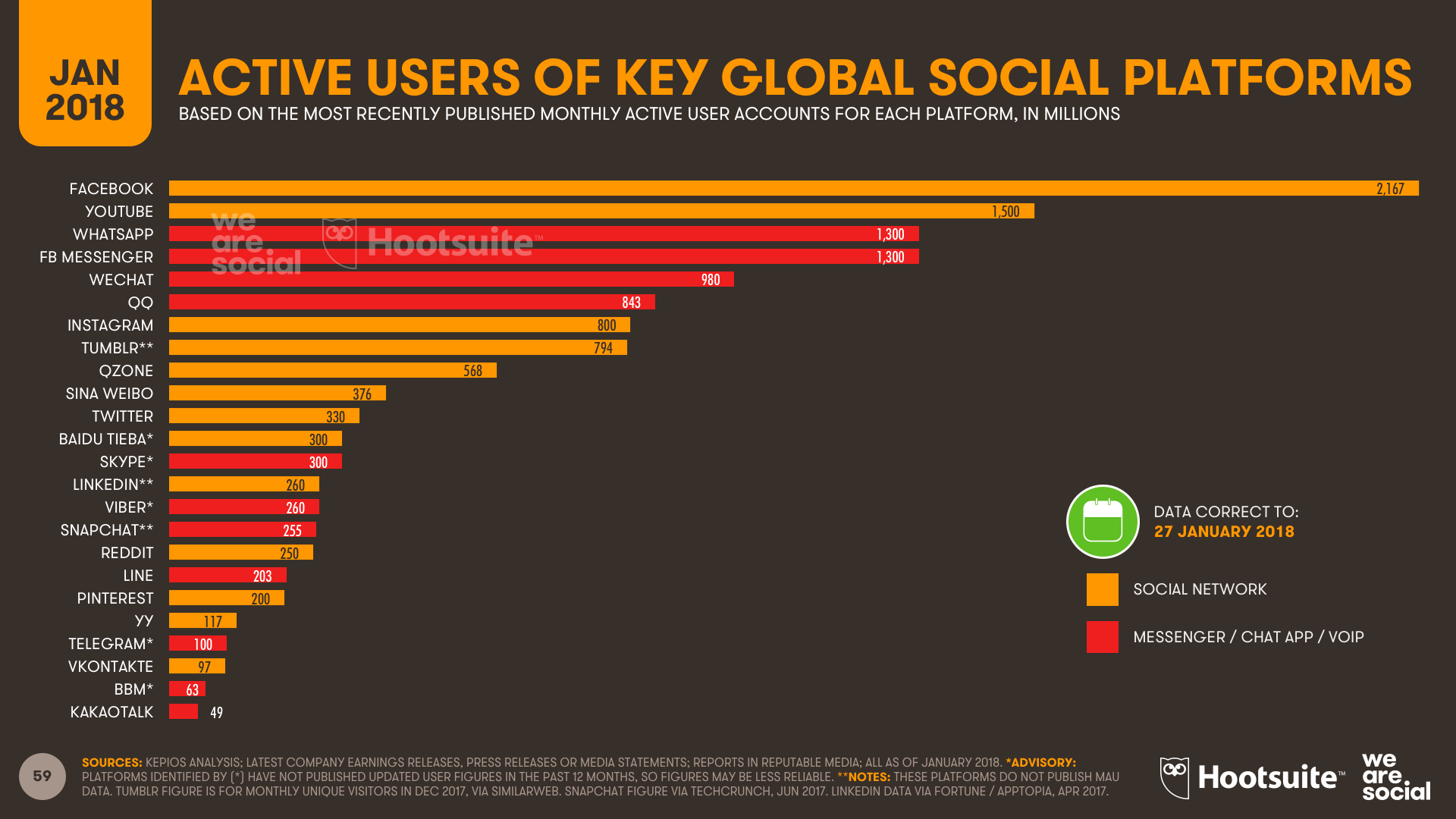 WhatsApp and Facebook Messenger both grew twice as fast as the core Facebook platform though, with the number of people using each messenger app up by 30 percent year on year.

Both apps are still tied in terms of user numbers, but the latest data from SimilarWeb shows that WhatsApp has the stronger geographic position. WhatsApp is now the top messenger app in 128 countries around the world, compared to Facebook Messenger’s 72. There are now only 25 countries where a Facebook-owned app isn’t the top messenger platform. 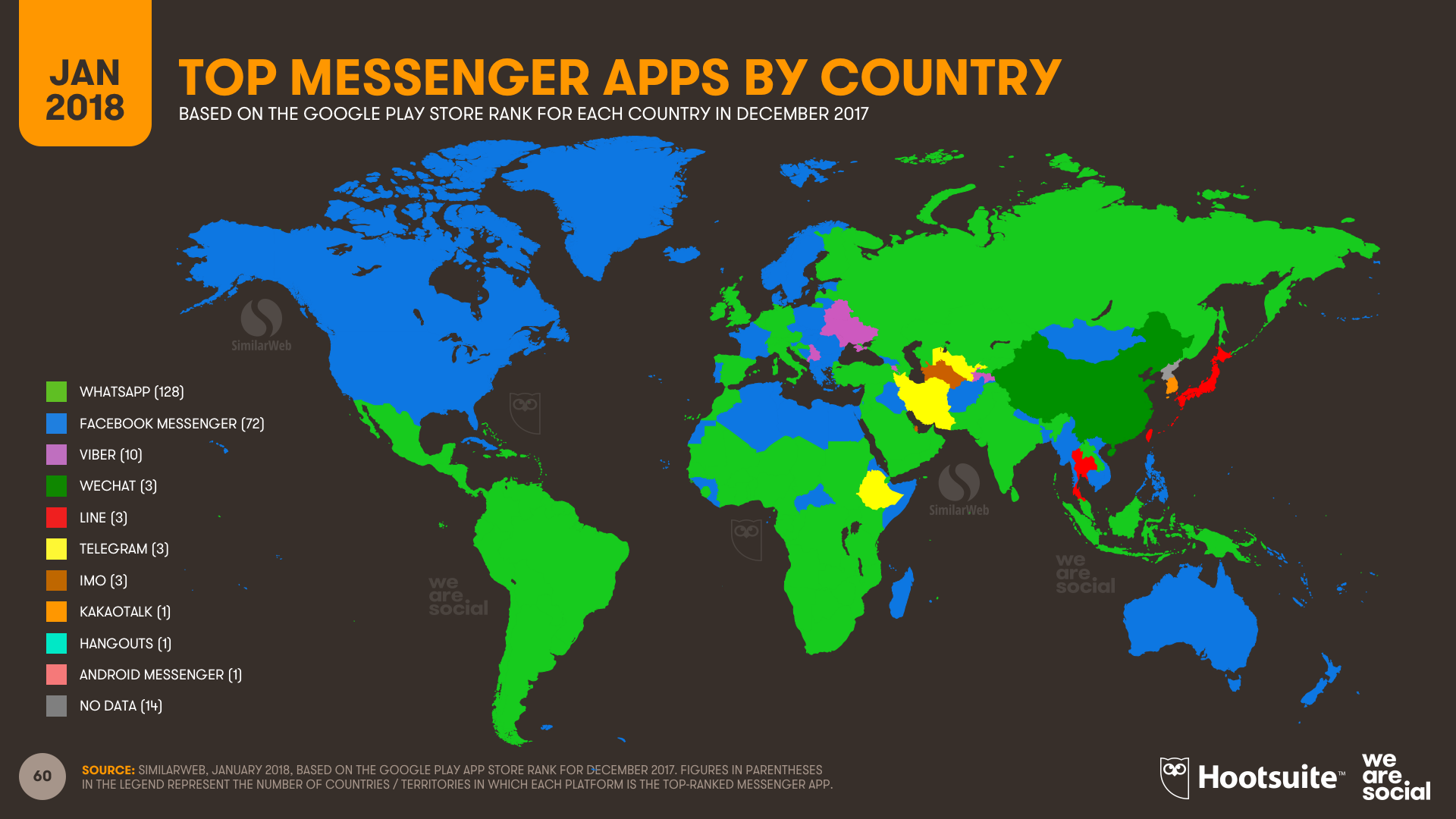 Despite these impressive messenger stats though, Instagram managed to claim Facebook Inc.’s standout growth story over the past 12 months, with the number of global users up by a third. 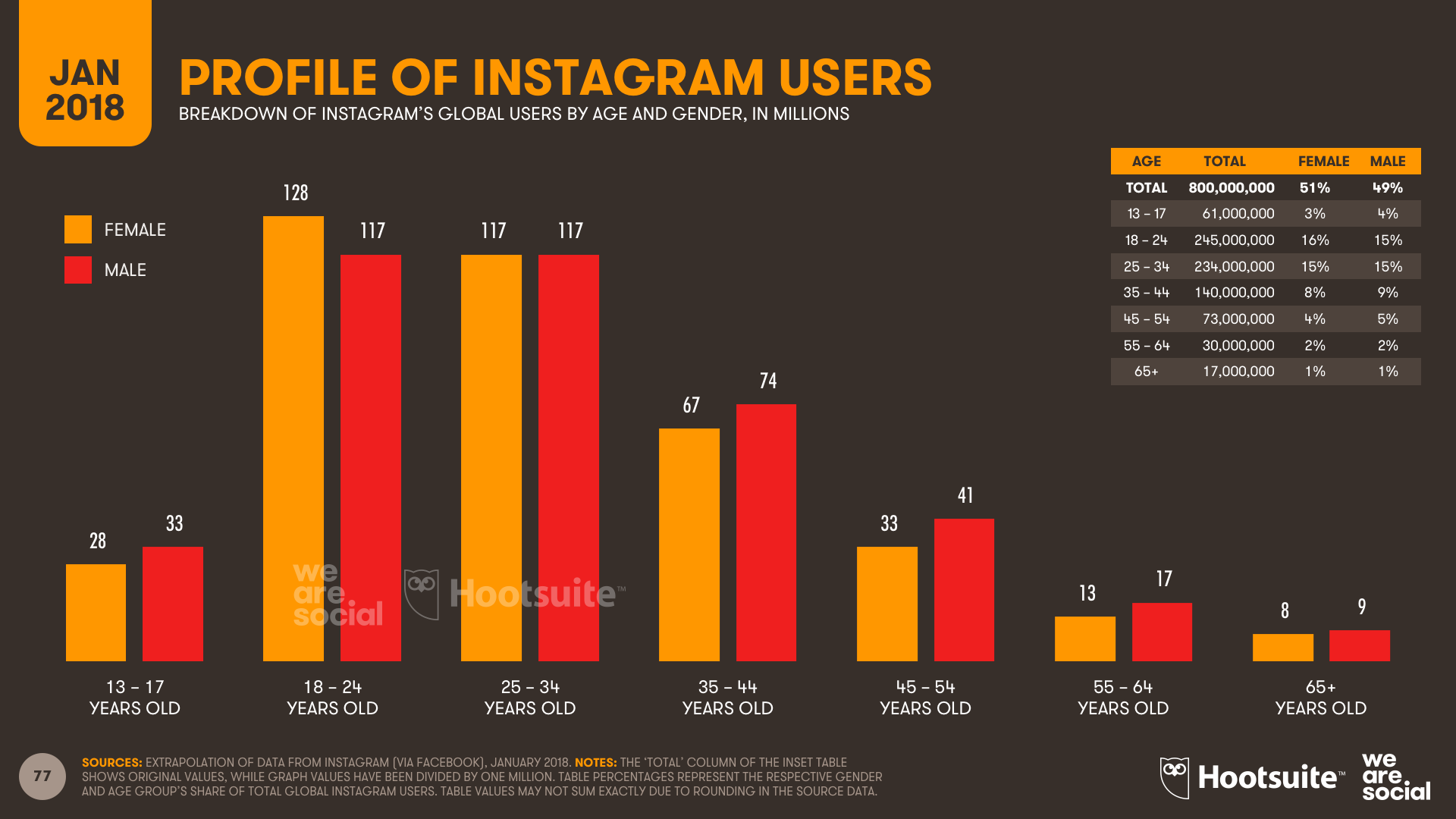 Despite the negative trends, these numbers will be valuable benchmarks for marketers everywhere – especially because they offer insights into the number of brands using paid media. 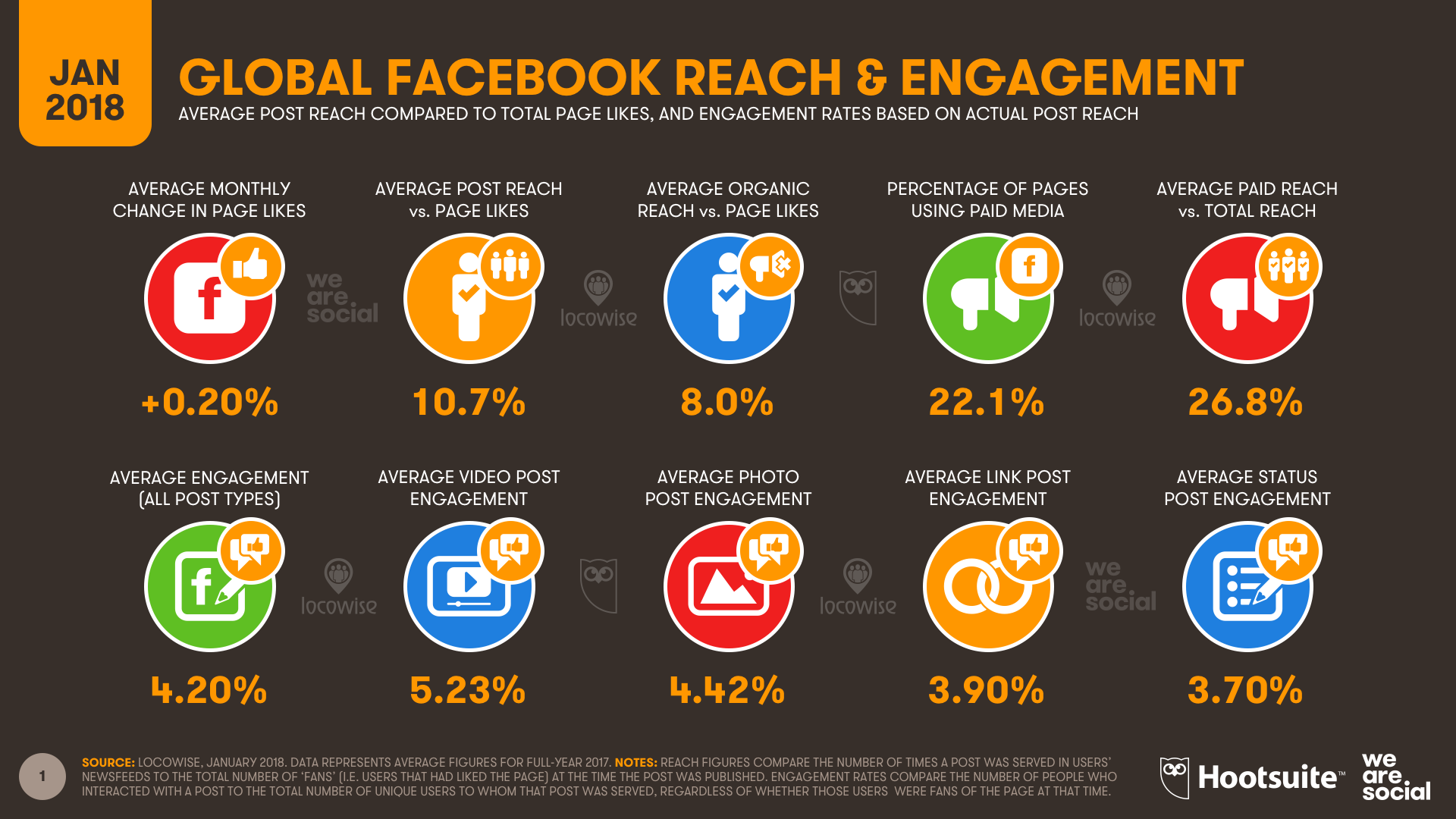 The latest data from Statista’s Digital Market Outlook shows that the total value of the e-commerce market for consumer goods grew by 16 percent over the past year. Total annual spend in 2017 reached almost US$ 1.5 trillion, with fashion products representing the largest single category. 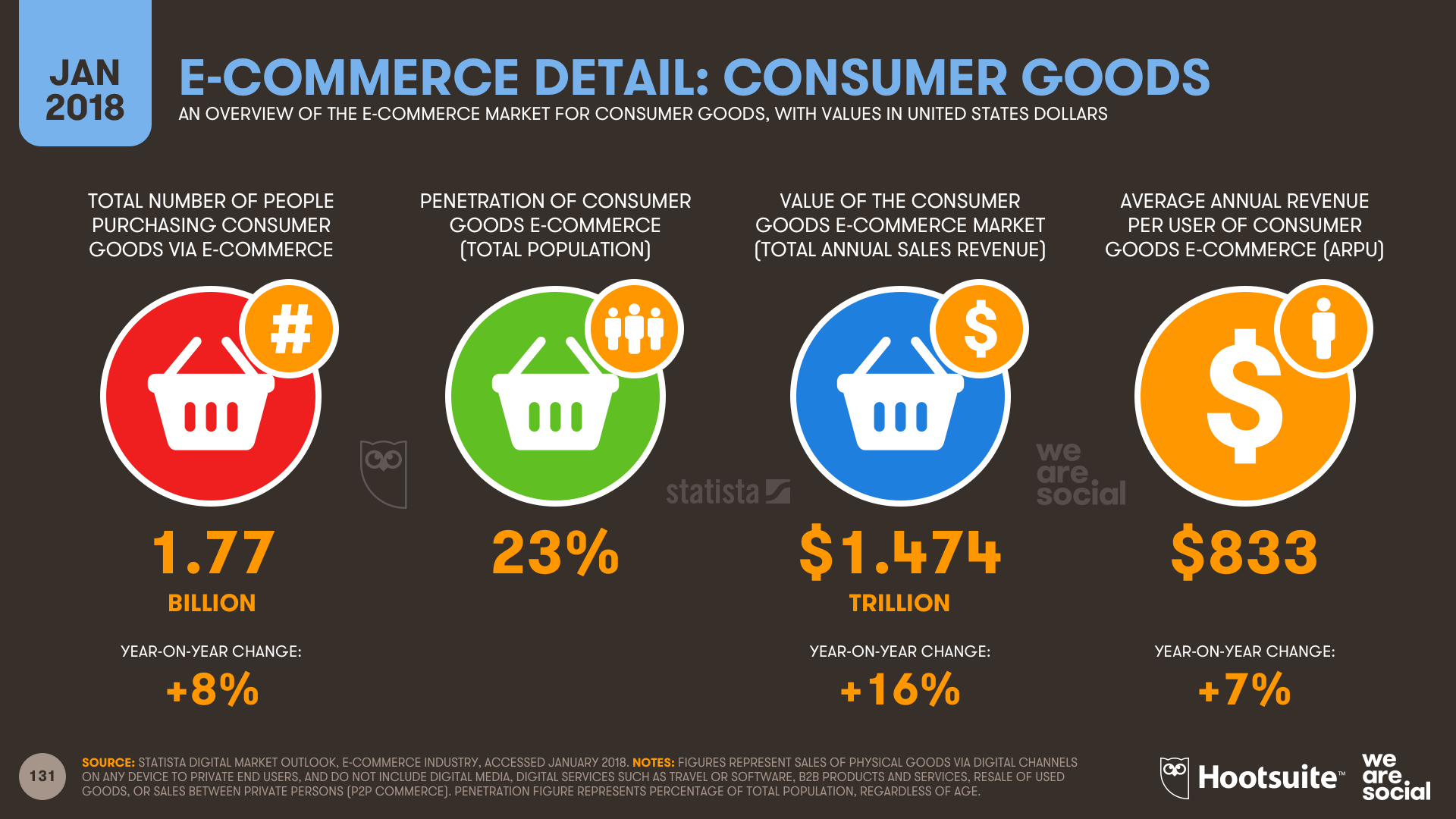 Roughly 45 percent of all internet users now use e-commerce sites, but penetration varies considerably between countries. 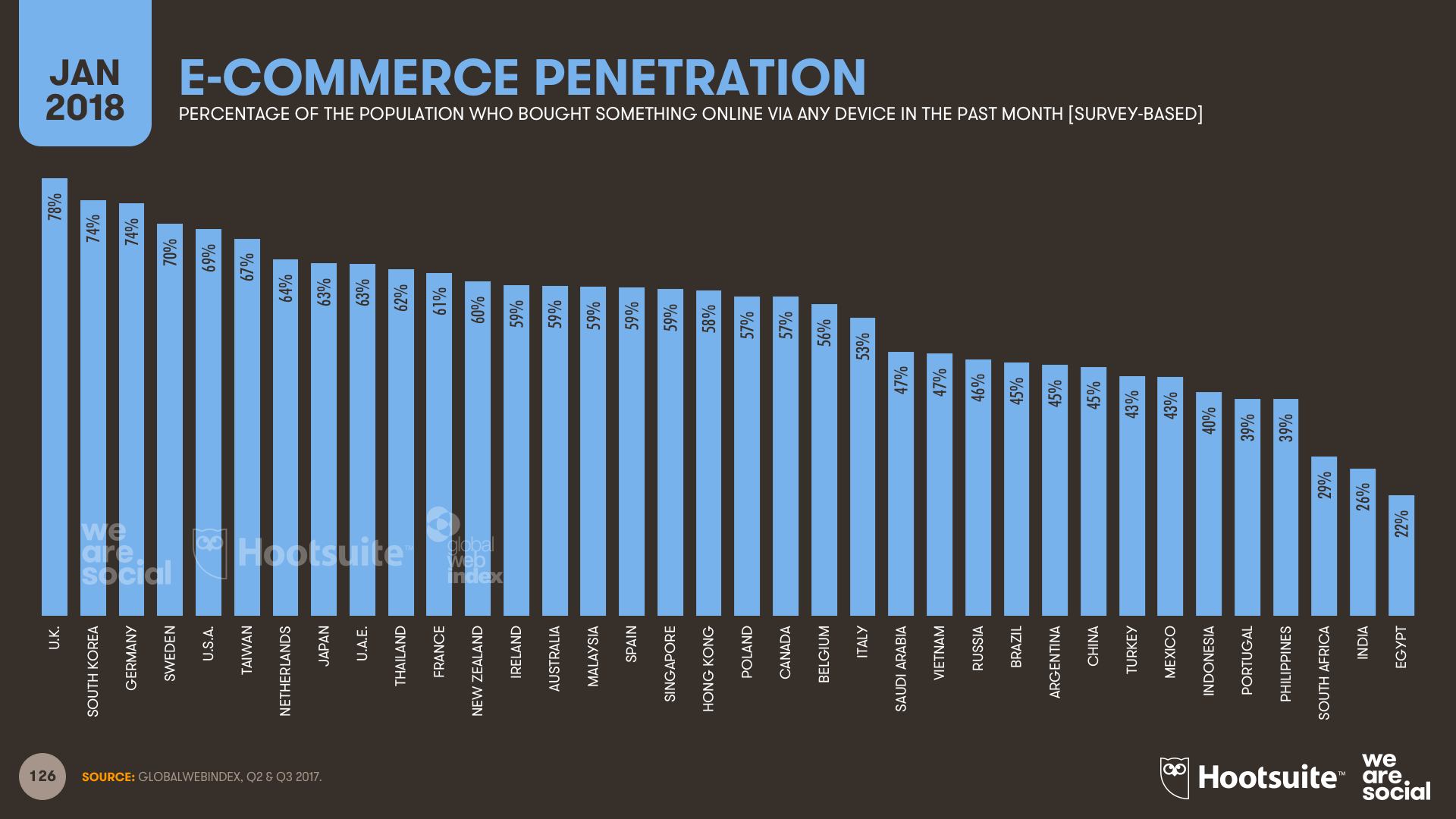 The amount that each person spends on e-commerce is also growing, with average revenues per user (ARPU) up by 7 percent year-on-year to reach US$ 833. The British are the biggest e-commerce spenders, with annual spend in the UK now greater than US$ 2,000 per user. 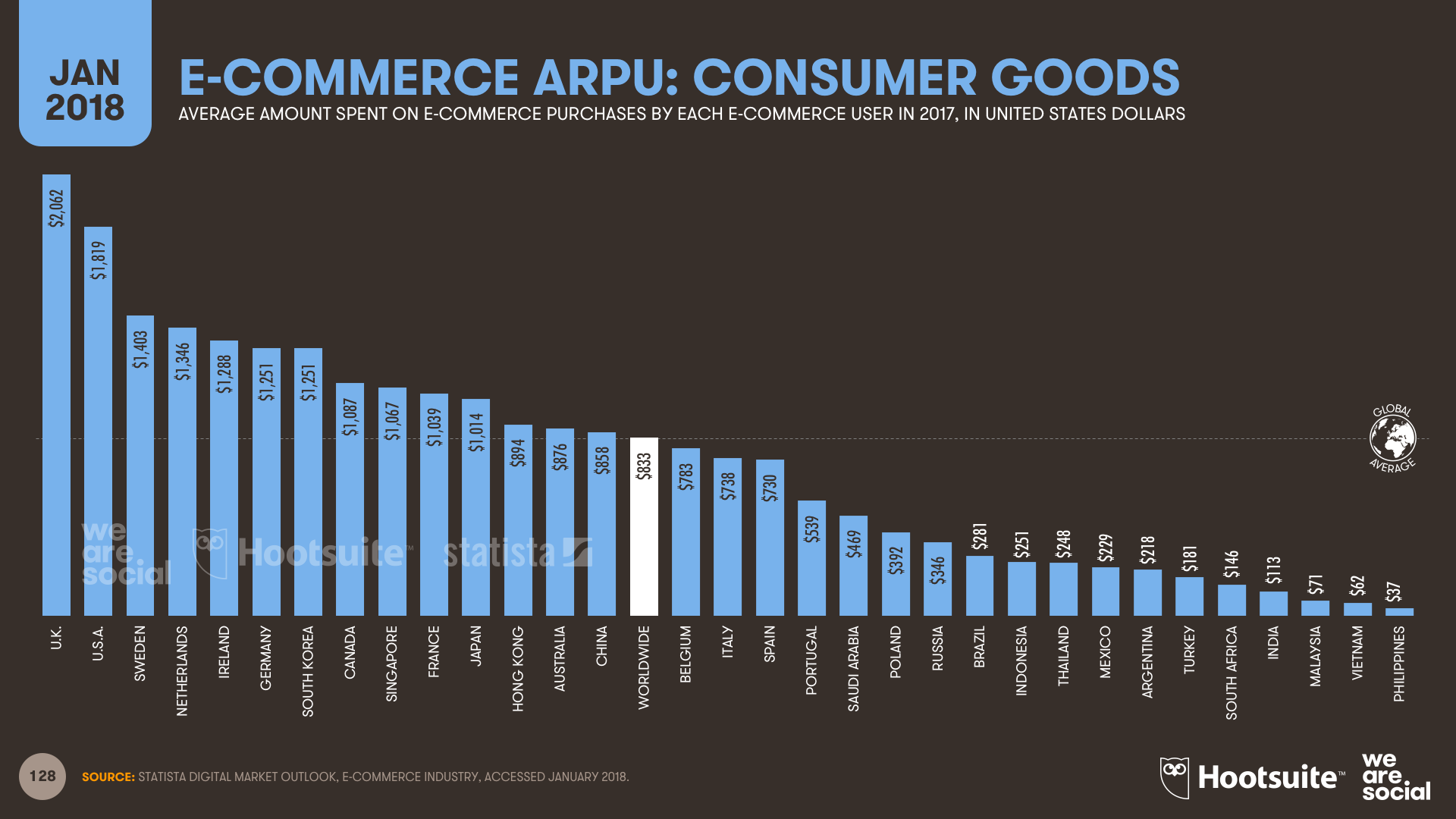 It is worth highlighting that these are just the figures for consumer goods too; if we add spend on other categories such as travel, digital content, and mobile apps, total global e-commerce value is likely to be closer to US$ 2 trillion.

The 2018 Global Digital report offers much more insights and details in about 5,000 charts and in-depth data for more than 230 countries and all the essential numbers you need to understand internet, social media, and mobile behaviors all over the world.

Thanks to We Are Social and Hootsuite for putting together these exciting information and delivering such valuable insights!

With regard to these research results do you want to rethink and optimize your Internet and Social Media presence? Or would you like to develop and implement a holistic Social Media and Online Marketing strategy?

Then we at Simone Philipp Management are glad to help you!

Just give us a call!